January 22, 2023
Over the last six months, Chieh-Yu Chou of Chinese Taipei has put together a pretty impressive resume.  After earning a silver medal for her runner-up...

January 22, 2023
reign as defending champion came to an end in the most frustrating of ways, missing a pair of shots down the stretch after building a...

It only made sense that Alex Kazakis’s day end in the same way that it started.

As he progressed through the brackets of the single-elimination phase of the Apex Wisconsin Open, the young Greek’s performance resembled that of a yo-yo. Just when it seemed he was gaining momentum or about to close out a set, a mistake would cost him. Conversely, when it seemed Kazakis’s championship hopes were starting to wane, an opponent would miss or commit a crucial tactical error.

Through it all, Kazakis was able to preserve, surviving four consecutive matches which advanced to an extra-frame shootout to win the 64-player event Saturday night at the Ho-Chunk Resort and Casino in the Wisconsin Dells. The reigning World Pool Masters champion defeated former World 9-Ball Champion Fedor Gorst, reigning World 10-Ball champion Eklent Kaci, Filipino Lee Van Corteza and Kuwait’s Bader Alawadhi to earn his first championship on American soil. Kazakis’s title match against the Kuwaiti upstart was a microcosm of his day – overcoming a handful of self-inflicted wounds only to rally and survive the match in the shootout. 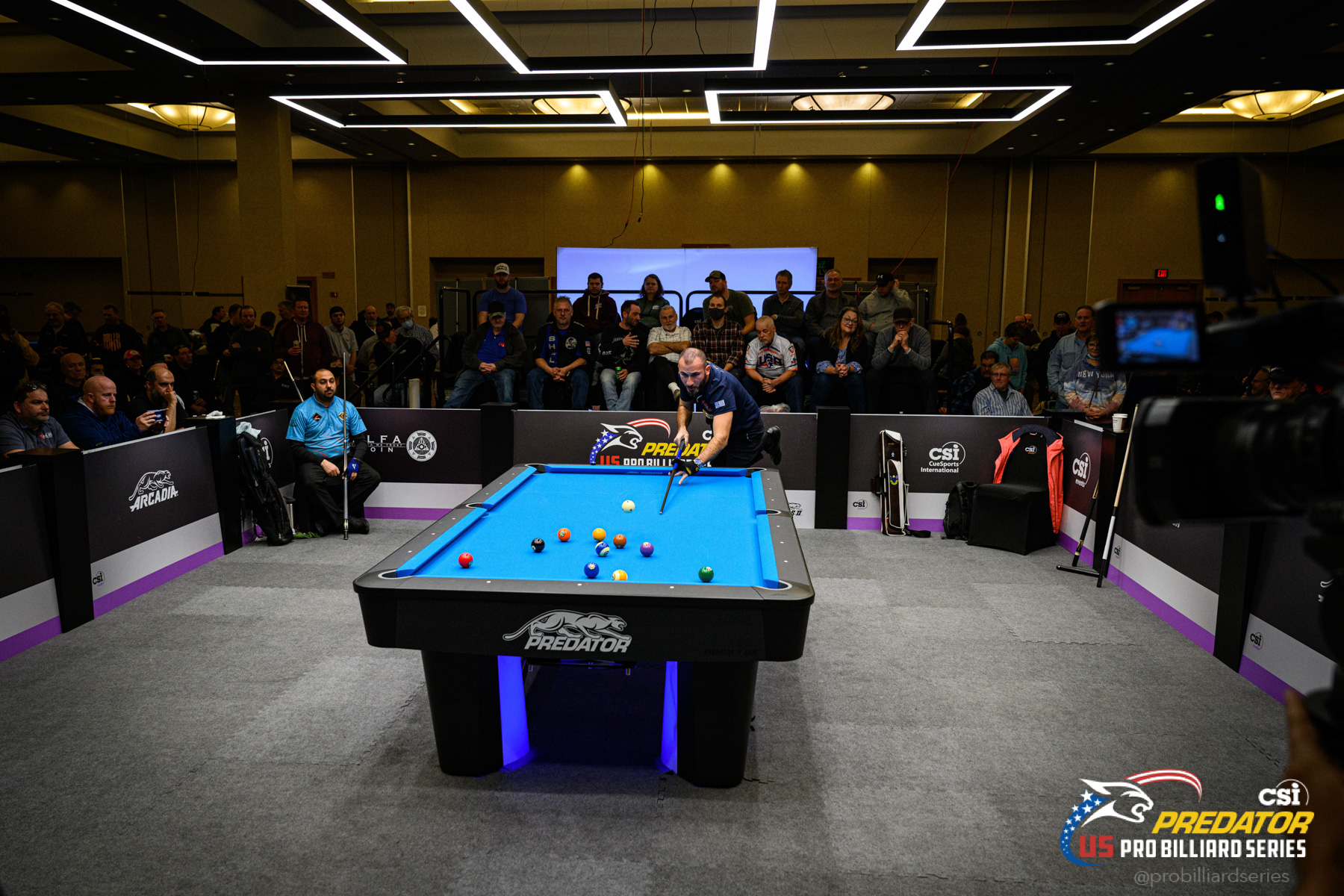 Alawadhi drew first blood in the championship match, taking advantage of a missed 9 ball by his opponent and adding a break-and-run to jump out to a quick 2-0 lead. Kazakis had a chance to retaliate in the third rack when his opponent missed a 5 ball and took full advantage, winning three straight games thanks to a break-and-run and an unforced error on the 5 ball in the fifth game by Alawadhi. With a chance to close out the set, Kazakis failed to pocket a ball on the break in the sixth game and Alawadhi cleared the table then promptly scratched on the break in the deciding rack, handing his opponent ball-in-hand and possibly the set.

As the Greek worked his way through the potential clinching rack, he positioned the cue ball for a sharp cut shot on the 5 ball which he missed. Alawadhi cleared the table to snatch the set, 4-3.

Kazakis began to rally in the following frame, taking advantage of a missed 2 ball by his opponent on the first rack and tacking on a break-and-run to build an early 2-0 advantage. The Alawadhi would tick off two wins of his own to tie the set thanks to a victorious safety exchange in the third rack and a missed Kazakis jump shot in the following game. The Kuwaiti appeared positioned to take the lead in the fifth game but scratched while trying to secure position on the 6 ball. Kazakis cleared the table to regain the lead then capitalized on a missed 5 ball by Alawadhi in the sixth game to claim the set, 4-2.

The shootout frame was over quickly, with Kazakis pocketing his first two spot shots while Alawadhi missed three straight balls to hand the match to his opponent.

The Greek’s final day of play began by cooling off the previously hot Gorst, with the young Russian struggling to make shots in his round of 16 match. Kazakis jumped out to an early 2-0 lead in the first set by winning a safety battle in the first rack then taking advantage of a foul by his opponent in the next game. He then used Gorst’s missed jump shot in the third rack and a missed bank shot of the 8 ball by the Russian in the next game to shut out his opponent, 4-0.

The second set was practically a photo negative of the first, with Kazakis now struggling to make balls while Gorst capitalized. In fact, the Greek missed a shot in each of the four racks played, as Gorst cruised to a 4-0 victory of his own.

After each competitor pocketed two balls in the first four frames of the extra-inning shootout, the cue ball was moved back a diamond on the table and the format switched to sudden death. Kazakis made his first shot while the Russian missed, ending any title hopes for the 21-yer-old from Moscow.

There would be a similar tale in the quarterfinals, as Kazakis squeaked by Eklent Kaci 4-3 in the first set, lost to Kaci 4-1 in the second then defeated the Albanian 3-1 in the shootout.

Kazakis then advanced to the semifinals where he met Lee Van Corteza, who used a combination shot on the 10 ball, a safety victory and a scratch on the break by his opponent to cruise to 4-1 win in the opening frame. After the two competitors split the first four games of the second set, Kazakis clawed out the fifth game after both players failed to pocket the 2 ball. The Greek would close out the set, 4-2, when Corteza misplayed a safety on the 4 ball in the following rack.

Neither player blinked in the first four innings of the shootout, with both competitors pocketing four straight shots. The spot shot success continued in the fifth inning when the cue ball was moved back a diamond as the format switched to sudden death, but Corteza championship hopes ended when he missed in his sixth attempt while Kazakis landed his shot.

The U.S. Pro Billiard Series returns to action next month with the Alfa Las Vegas Open March 23-26 at the Rio All-Suites Hotel and Casino. This event will coincide with the CueSports International Expo, which brings thousands of amateur pool players for the BCA Pool League World Championships as well as the USA Pool League National Championships.

The Wisconsin Open was the second event of the year for the U.S. Pro Billiard Series and the first ever to be staged at Ho-Chunk Resort, a sprawling facility north of Madison which offers a 302-room hotel as well as spacious gaming and convention space. 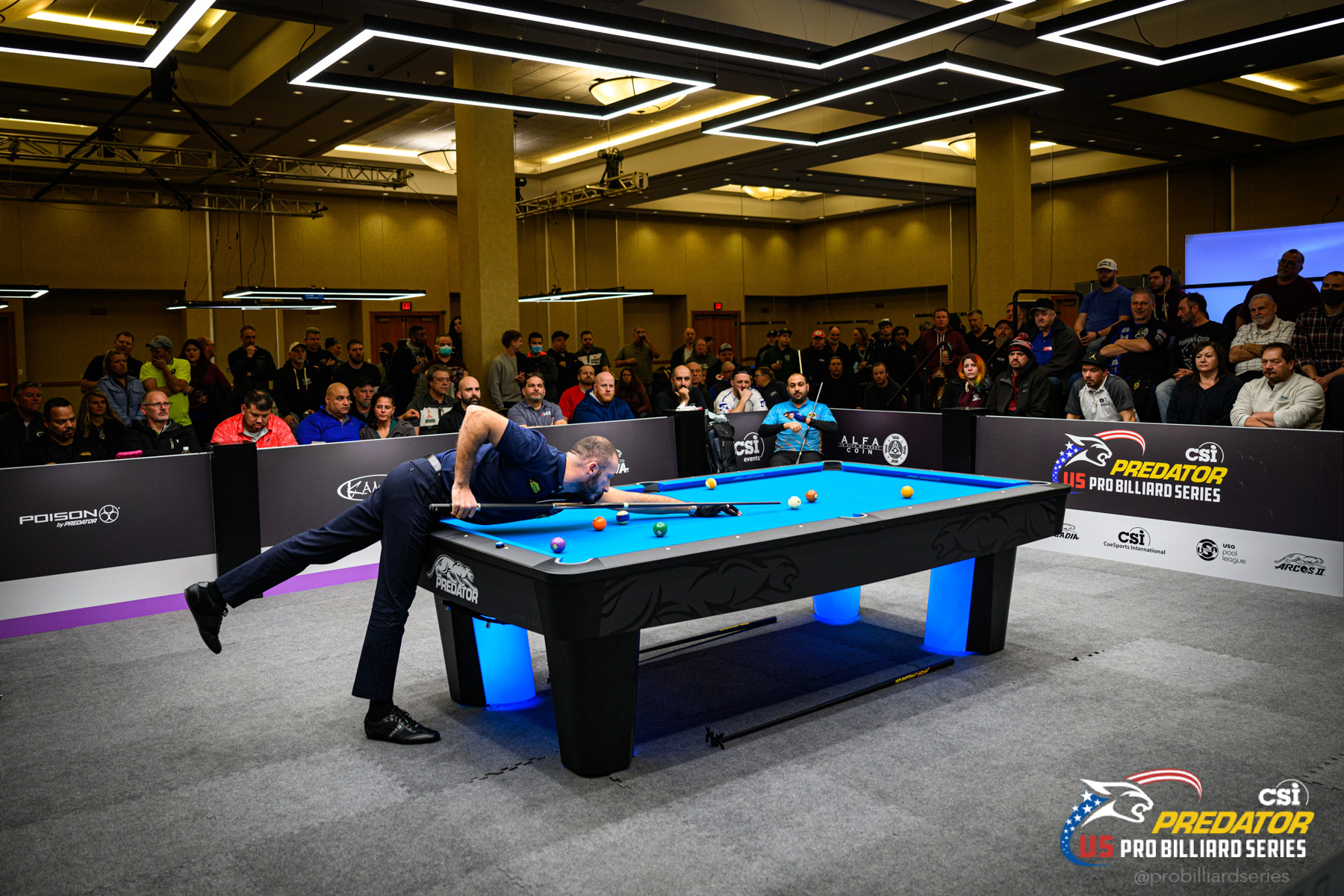 SUSSENGUTH SENDS OUSCHAN TO LOSERS’ SIDE ON DAY TWO